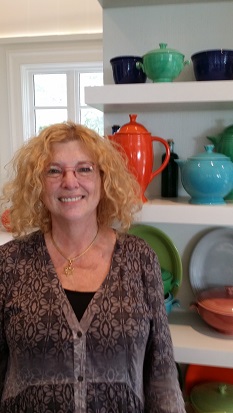 Bonnie grew up in Shrewsbury, NJ. Her ties to MRT go all the way back to 1961. Her parents joined MRT that year when it was housed in the Presbyterian Church. She was confirmed at MRT by Rabbi Ellenbogen.

Bonnie also started her volunteering at MRT at a young age. While attending Red Bank Regional High School she also found time to be involved with the MRT Youth Group, and was President from 1970-1971. Her daughter Sarah has followed in her footsteps serving as Youth Group President in recent years.

Bonnie went on to college at SUNY – College of Environment Science and Forestry at Syracuse University. After college she met her husband, Ron, in Texas and they have been married for 26 ½ years. They have three children. Zoe is 33 and lives in Houston. Adam is 31 and lives in Lake Charles, LA. He is married to Katherine and they have a one year old son named George. Sarah is 18 and lives at home. She will be attending Sarah Lawrence College in Bronxville NY in the Fall.

Bonnie and her family moved back to Red Bank in 2012. She spent most of her career as a major department store retailer and retired after 27 years. She currently sits on the Monmouth Medical Center Foundation Board as well as the MRT Board as Chair of the Religious Education Committee.