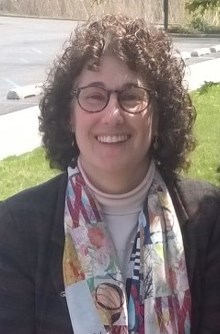 Faith is the Chair of our Finance Committee. She makes her home in Red Bank with her husband Brian and their two children, Evan and Amy. Faith is an Information Technology Project Manager working primarily on governmental systems.

Faith joined the Temple in 2005 and upon being asked to participate, became a key figure in composing and preparing the Ad Journal for our Arts Festival. She’s been building an ever widening circle of friends by being an active participant in our Temple life ever since. It great to see that Evan and Amy seem to be following in her footsteps. Faith joined the Board as co-Chair of the Religious Education committee in 2011 and became Finance Chair in 2014.

In addition to being a working mom, Faith grows some of her own veggies in her garden and admits to dabbling in the kitchen. Faith is an important part of our Shir Chadash musical ensemble where she plays guitar and sings. Look for her on the Bimah on First Fridays.